Both 13u Squads Overcome Early Deficits To Win Big

Coach Nata’s Royal squad fell behind 5-0 in the first inning but quickly answered with four first inning runs of their own led by a Matt Jackson home run in his first Dodgers at-bat. After a series of lead changes, the Dodgers would take the lead for good in the 5th inning and never look back en route to a 16-6 final score.  Jackson, Anthony Baldassano, Cam Christopher, and Charlie Letzig, who also launched his first homer of 2021, all finished the contest with three hits apiece.  Shea Leis dazzled in relief, allowing no earned runs over 5 innings of work to earn the win.

Coach Rob’s Silver team won a tough contest of their own Wednesday night, battling back to beat the Park Ridge Jr. Hawks 14-8.  Aiden Nelson led the charge going 3-3 with a triple.  Conor Fitzsimmons finished the night 2-3 with 3 RBI and Grady Boeche chipped in 4 RBI of his own.

The 13u groups will be back in action this weekend in Waukegan. Good luck boys! 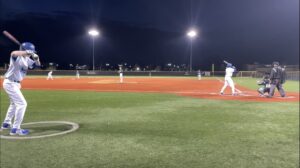